In October 2018 Friends of Ku-ring-gai Environment (FOKE) resolved to commence a campaign to call for the UNESCO World Heritage listing of Ku-ring-gai Chase National Park (KCNP).

This has now developed into a proposal for the eventual listing of a potential Aspiring UNESCO Global Geopark resulting from the significance of the GeoRegion’s outstanding geological features. The initial focus is the development of a designated ‘GeoRegion’, with geotrail development signage and promotion of its significance. To date we have received strong support from key stakeholders within the three Councils, local politicians and several State Government Ministers, and the NSW Parks and Wildlife Service.

FOKE originally initiated this project with the objective of making a positive contribution to conservation based in and around Ku-ring-gai Chase National Park, by seeking recognition of the very significant natural and cultural heritage values. This is exemplified by a wide range of geologically significant features (i.e. geosites) that exist in this area, added to its strong biodiversity recognition. 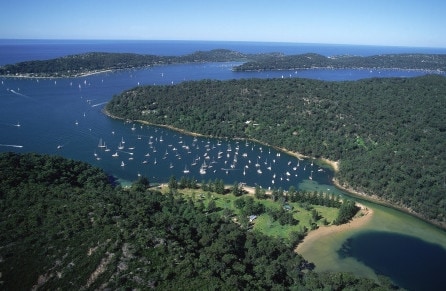 Natural and Cultural Heritage of the ‘Ku-ring-gai GeoRegion’

The special geosites chosen to profile exist in a broad area (with the working project name of ‘Ku-ring-gai’) and previously classified in 2002 as forming part of the Hornsby Plateau Landscape which includes:

‘Summary of Significance: Ku-ring-gai Chase National Park and Long Island, Lion Island, and Spectacle Island Nature Reserves contain an exceptional representation of the Sydney region biota, a region which is recognised as a nationally outstanding centre of biodiversity.  The place contains a complex pattern of 24 plant communities, including heathland, woodland, open forest, swamps and warm temperate rainforest, with a high native plant species richness of over 1000 species and an outstanding diversity of bird and other animal species. The place is an outstanding example of a centre of biodiversity.’

Dr John Martyn, a member of our Steering Committee, has produced a 135 page book highlighting the importance of the features of the area. A sample of this book is available here.