Ku-ring-gai receives some of Sydney’s highest rainfall, and its slopes fall steeply towards national parks on three sides – Lane Cove, Garigal and Ku-ring-gai Chase.  Other natural features of Ku-ring-gai are its tree canopy (including important remnant Blue Gum High Forest), its wild life, its watercourses and its readily erodible soils. Ku-ring-gai’s residential areas occur on the ridge tops where the richer soils and higher rainfall supported Sydney’s only Blue Gum High Forest.  The trees of that forest still characterise this unique Sydney landscape.

The houses generally nestle below the level of the tree canopy.  This, and the general avoidance of tall buildings on ridgelines, has been important to maintaining the treed character of the area.  The many urban conservation areas that occur throughout this leafy landscape have architecturally significant, attractive early twentieth century houses with large, well kept gardens and, in some cases, large landscaped grounds that blend into and enhance the forest landscape, creating a total context that is of the highest aesthetic quality.  All this has contributed to streetscapes that make a significant contribution to the overall character of Ku-ring-gai. 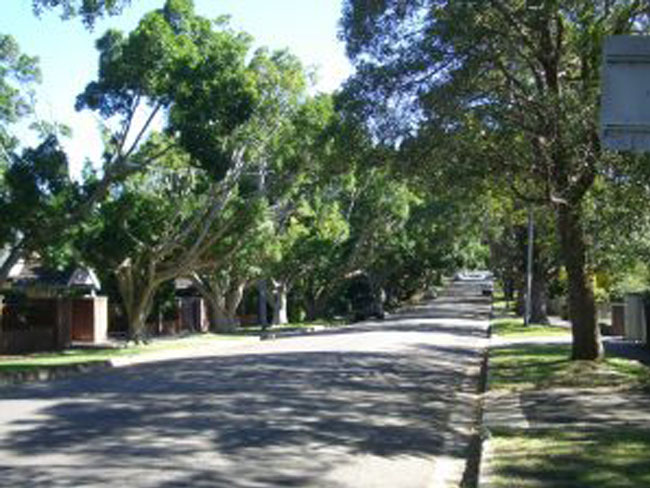 Ku-ring-gai was originally settled by timber getters, orchardists and farmers and supplied much of the timber for early Sydney.  Blackbutt was used for general construction work, Sydney Blue Gum for beams, floorboards, wheel-rims and ship-building.  Red Mahogany was used for furniture and ship framing, Turpentine was used for wharves and construction work, Grey Ironbark and Red Bloodwood for fencing and Forest Oak for cabinet-making and shingles.

Following the cessation of extensive logging in the 1800s there was considerable regrowth, with a major canopy of trees re-established.  In the 1900s almost all of Ku-ring-gai was designated for residential development as opposed to commercial and industrial developments, and very few blocks of flats were permitted before 1940.  This has allowed the tree stands to recover much of their former glory.  In 1930 Ku-ring-gai Council publicised a new “commandment” – ‘Thou shalt preserve those trees’ referring to the ‘Spires that Speak to the Soul’.

More recently, however, large trees have been under a deal of pressure, from a move towards houses with larger footprints, and the State Government’s push for more medium density housing.  Attempts have been made to reverse this trend by limiting the proportion of “built upon area” a block of land may have, and ensuring that site coverage is such as to enable “deep soil plantings” such as required by large canopy trees if they are to thrive.  Keeping “built upon area” to a low proportion is also important to limiting rainwater run-off.  Together with a requirement for stormwater retention pits, that slow the run-off from heavy showers, these measures assist in preventing erosion in the watercourses leading through adjoining bush and parkland, and reducing the siltation of the harbour.

The introduction of the 10/50 clearing code allowing the removal of large trees within a 10 metre radius of a building has generated a massive reduction in tree canopy cover in Ku-ring-gai. Read More>>

The many surviving remnant trees in the areas of Blue Gum High Forest in Ku-ring-gai form a rare Sydney landscape.  The Forest’s Sydney Blue Gums, Blackbutts and Ironbarks are among Sydney’s largest and most majestic trees.  They are however a critically endangered ecological community which was originally rare in the Sydney area, covering only 11,000 hectares (3%) of the Cumberland Plain’s 374,000 hectares.  Massive clearing has now left only 99 hectares of relatively intact plant community (0.9% of what originally occurred – 0.03% of the Cumberland Plain vegetation).

The need to protect this community has in recent years been a significant focus of the Blue Gum High Forest Group, which has lobbied with some success to secure the future of the remnant forest in Ku-ring-gai. See also our Resources page for links to other sites.

The continued weakening of Biodiversity Laws protecting these remnant forests and the fauna and flora they support has pushed many communities into a threatened status.  Read More>>